It was a chilly, February afternoon in Elizabeth City, North Carolina when Ruby Whedbee, a 90-year-old resident who suffered from dementia, wandered away from the Brookdale Elizabeth City senior living community. While an extensive search was conducted by both the police and community staff, Ruby was not found until the following day. By the time they found her, she had already passed away.

Ruby had taken shelter in a greenhouse about half a mile away from the senior community. While the official cause of death wasn’t released, it’s suspected that she may have died due to the low outdoor temperatures. The temperature was said to have dipped as low as 40 degrees while she was gone.

Back at the senior living community, it was found that exit doors were accessible to residents and weren’t alarmed at the time of Ruby’s elopement. The community claimed they had a wander management system, but it had been deactivated and residents weren’t wearing electronic signaling devices that would have set off the alarm if it had been working properly.

Due to the unfortunate death of Ruby and the investigation findings within the community, the community’s license was downgraded and they were told not to accept new residents. With this incident in mind, it’s clear that every community must effectively educate staff on elopement and evaluate their current policies and procedures.

In order to help stop elopements before they occur, it’s suggested that the following be completed.

Since elopements don’t happen extremely often, elopement assessments are often overlooked when new residents arrive at communities. It’s advised that every resident be evaluated to see if they have enough cognitive awareness to know that they need to remain within the building unless accompanied by staff or a family member.

Wandering risk assessments should also be conducted multiple times a year to check for any cognitive decline that may put them at risk for elopement. If an assessment concludes that a resident is at risk of wandering, they should be secured in a dementia-specific neighborhood with devices that help to prevent wandering.

In addition to evaluations, new residents should be placed in rooms as far away from exits as possible. This is due to the fact that about half of the total number of elopements occur within the first few days of a new resident residing in a community. It’s recommended that their rooms be placed near community areas or areas that are heavily supervised until their behavior patterns have been observed and established by staff.

Security technology is vital when it comes to elopement prevention. Security monitoring devices such as cameras should be placed at all exits to ensure each resident is accounted for. In the event that a resident goes missing, the cameras can be checked to find out where the resident was last seen or which door he or she walked out of.

Magnetically-locked, key-coded doors and door alarms are also necessary. Magnetic locks ensure no one can enter or leave without permission. Door alarm systems will secure community doors to help prevent residents from wandering off. They’ll also immediately notify staff if someone tries to leave while unsupervised.

Both security devices and door alarms should be monitored on a regular basis to ensure they’re working properly. Proper documentation must also be done, guaranteeing there’s a record of when security items were last checked.

Make sure to understand your individual state requirements and regulations regarding locked or alarmed doors. Make special note of any expectations for locks to release during a fire or emergency event to allow for egress. These regulations often apply to doors as well as gates in outdoor courtyard areas.

An added blanket of security in preventing resident elopements comes from the use of electronic tagging devices. These electronic devices may be connected to the community’s door alarms or even to GPS, allowing residents to be located wherever they may be. They generally come in the form of a necklace or wrist bracelet, but some are inserted into shoe soles.

Ensure that staff is aware of and trained on your community’s policy to check on all residents who exhibit potential wandering behaviors. Many communities require one or two-hour check-ins to ensure all residents in the community are where they should be.

Staff should also be aware that they need to educate any visitors about the safety precautions that need to be taken to prevent resident elopement. The more people aware of the issue, the better.

How to Handle Resident Elopements

It’s vital that communities have a plan in place in the event that an elopement occurs. Make sure that these important steps are highlighted in your emergency preparedness plan:

To make your employees aware of the procedure, you can distribute or hang up this helpful flow chart around your facility! 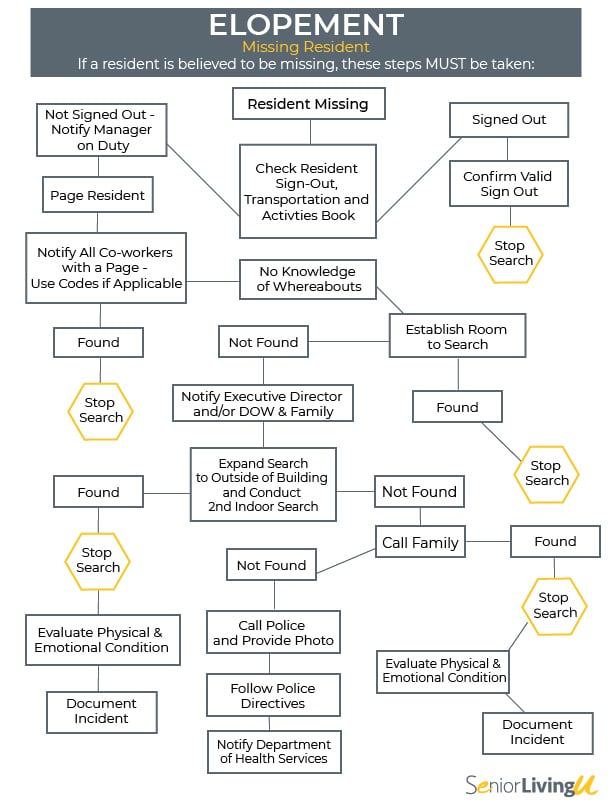 Looking for resources to help you effectively train staff on both mental disorders and how they play a role in elopement? Take a look at our Alzheimer’s and dementia resources!